Harold and Maude is playing at the Paris Theater as part of the series Classics + Directors, chosen by Michael Rianda as a film that inspired The Mitchells vs. The Machines. Marya E. Gates considers the pleasures and joys of rewatching beloved movies. 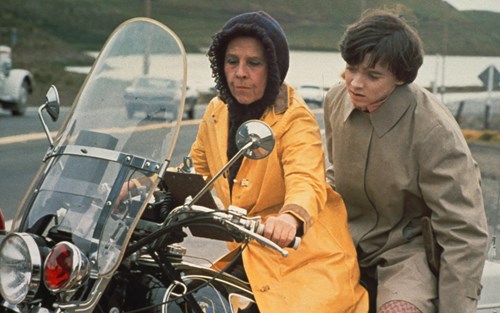 There’s some movies I’ll watch every time they’re playing at an art house theater. Harold and Maude, The Red Shoes, Blue Velvet come to mind immediately. As a 90s kid I’ve always been a serial re-watcher of movies. I would rent my favorite films over and over from Top Hat Video in my rural hometown. I would scan the cable schedule for something I loved. I grew up in a small town where the local theater played one film at a time, and only on the weekends, so it wasn’t until college that I discovered the particular joy of rewatching a favorite film on the big screen. Whether I’m rewatching a film at home or in a theater, there are many pleasures to be found in the experience. For some, rewatching a film brings the comfort of familiar characters who feel like friends. For others, it’s something else entirely. Some films have a twist or painfully dramatic ending, some are puzzle boxes that require multiple viewings to parse..

A few recent films that fall into this latter category include Charlie Kaufman’s dense dark comedy i'm thinking of ending things, Rebecca Hall’s exquisite adaptation of Passing, and Jane Campion’s haunting revisionist western The Power of the Dog. All three take on a new meaning when you reach their denouement, inducing viewers to go back to the beginning and see what they notice knowing how it all ends. If you haven’t yet watched these films, stop reading now because spoilers abound ahead.

Adapted from Iain Reid’s novel of the same name, Charlies Kaufman’s i'm thinking of ending things follows a nameless young woman (Jessie Buckley) on a road trip to meet the parents (Toni Collette and David Thewlis) of her boyfriend Jake (Jesse Plemons. As this trip becomes increasingly surreal, the film cuts to a seemingly unconnected story of a hapless old janitor (Guy Boyd) working at a high school. Eventually, these two storylines will collide.

.At one point the woman sees a picture of young Jake, but is convinced it’s actually a picture of her as a child. Throughout the meeting Jake changes details about what his girlfriend’s name and occupation are. Jake’s parents change ages repeatedly. Various pop culture references are peppered throughout the film, as when the woman recites a monolog taken directly from Pauline Kael’s review of A Woman Under The Influence as if it were her own thoughts. By the end it’s implied that the woman is a creation of Jake’s mind, and that he is actually the old janitor. Kaufman and Reid leave us with more open questions than answers, packing each frame with symbolism open to multiple interpretations. Upon each rewatch of the film, layers are peeled back to reveal more layers, questions lead to more questions. It's a nesting doll of a movie that grows more rewarding with each revisit.

Similarly in Rebecca Hall’s Passing, adapted from the novel by Nella Larsen, the film leaves us with a shock and unanswered questions. On first watch the film is about two girlhood friends, Irene (Tessa Thompson) and Clare (Ruth Negga), who reunite one day while “passing” as white in an upscale hotel tea room. Irene learns that not only does Clare continually pass for white, she is married to a virulent racist. As their reignited friendship grows, so does an unspoken tension. Clare’s situation with her husband John (Alexander Skarsgård)  is a powder keg that explodes when he meets Irene on the street with another Black woman, inadvertently revealing the truth about his wife’s past. The film ends with Clare falling to her death from an open window. Or was she pushed? If she was pushed, by whom? Like the book, the way Hall films Clare’s final moments leaves much ambiguity. There are no easy answers.

In rewatching the film, not only do you know from the start that Clare’s husband will eventually learn her secret, you know that Clare is not long for this world. Rather than defusing the timebomb, this knowledge adds to the potency of Ruth Negga’s performance as Clare. Her vibrancy feels brighter knowing it’s about to burn out completely. Her reckless abandon in reclaiming her heritage while still clinging to the white world in which she moved for so long feels even more dangerous.

Repeat viewings also heighten the internal collapse of Irene, so beautifully crafted by Tessa Thompson. You see her playing with this same fire early on while shopping for toys in a white shop, in choosing to take tea in the white hotel. The physicality of her performance comes into clearer focus. The way her eyes are always on guard. The way she recoils at the touch of her husband (André Holland), but seems to hold back bursting emotions around Clare. Her gazes filled at times with jealousy, at others with what seems like a deep longing. After the incident with John on the street, Irene’s fortitude collapses. But is it worry for her friend or relief that all this will likely soon be over? A little of both? One pleasure in rewatching is holding these questions in the back of your mind as you watch the final scenes play through, even as the ambiguity remains.

One last, recent example of a rich film that rewards viewers upon multiple watches, Jane Campion’s adaptation of Thomas Savage’s novel The Power of the Dog reveals its secrets slowly, but also keeps them in plain sight the whole time. When we first meet Phil Burbank (Benedict Cumberbatch), it’s clear there’s a bit of a fissure in his relationship with his brother George (Jesse Plemons). Exacerbated by George’s growing relationship with Rose (Kirsten Dunst), Phil takes his anger out on her through emotional abuse, while taking her son Peter (Kodi Smit-McPhee) under his wing like his own erstwhile mentor Bronco Henry. The tension of this untenable situation boils until Phil mysteriously winds up dead of anthrax poisoning.

What’s so clever about Campion’s direction is how plainly she lays out Peter’s predilection for violence, his protectiveness of his mother, and the presence of anthrax among the cattle, while at the same time casting a spell so beguiling when the event finally happens it’s still a shock. By revisiting the film, these scenes and lines that passed by with ease the first time take on a sinister undercurrent. The chemistry between Cumberbatch and Smit-McPhee now has an even more dangerous charge to it. Power dynamics shift in scenes where Phil seemed a mentor, Peter his willing pupil.

Along with shifts in perspective, repeat viewings allow you to luxuriate in the world of these films. With The Power of the Dog in particular, there’s great pleasure to be found in revisiting the gorgeous landscapes captured by cinematographer Ari Wegner. Her use of scale and depth in photographing the rolling hills and desolate prairie transport you to another place and time, heightened by Jonny Greenwood’s stirring score.

There’s also a joy in rewatching little moments that have emotional weight, as with the courtship between George and Rose. Like when Rose is frantic while preparing dinner for unruly guests and George silently takes off his coat, places a towel over his arm, and serves them the salads, using his power as the richest man in town to force them to behave. This moment doesn’t change with the twist ending, but it does grow sweeter and more profound with each reviewing.

For me, films are never a fixed mark. They grow as I grow. Revisiting a film allows me to access this growth within myself, not just access to further layers within the work itself. I look forward to rewatching the films discussed above for many years to come and wonder exactly what version of myself I might find within them.

Marya E. Gates is a freelance culture writer who specializes in female directors and classic cinema. You can read more of her writing here.